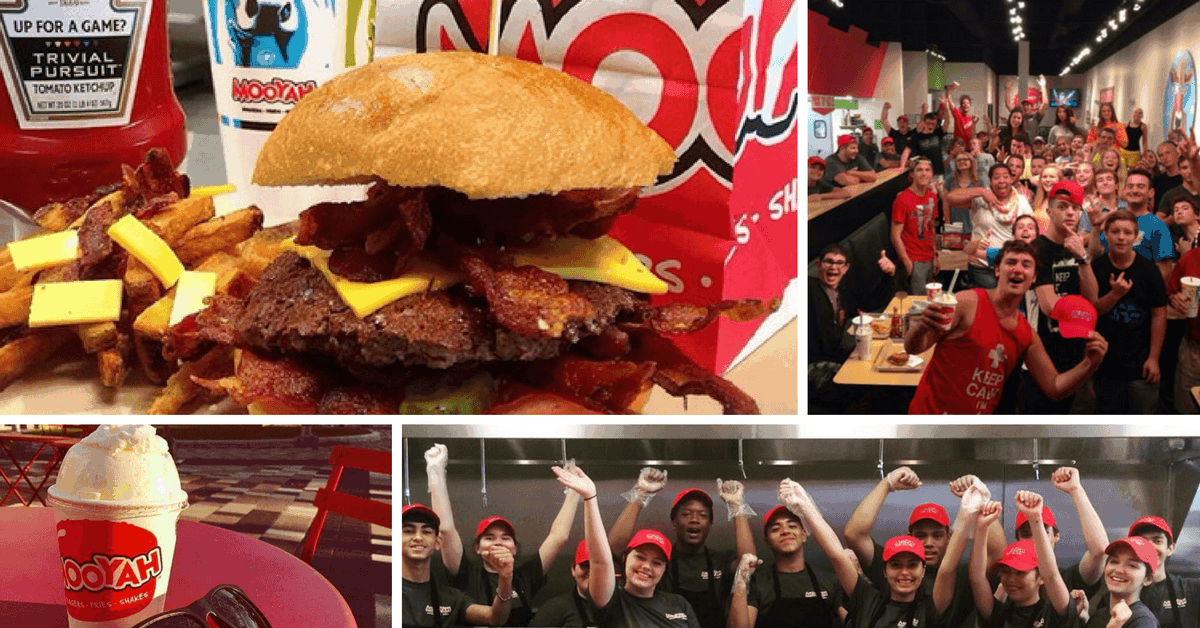 MOOYAH is a fast casual restaurant chain based in Texas. It currently has 70+ locations across the United States, most operated by franchisees. The company, which focuses their menu on burgers, fries and shakes, found itself struggling to compete in local search against its large competitors. The restaurant chain faced some significant issues, including a lack of accuracy in crucial NAP (name, address, and phone number) information across major networks like Facebook and Google. Customers looking for a nearby MOOYAH had trouble finding the location causing short- and long-term issues. Google searches for Burgers nearby were only surfacing MOOYAH in the Top 3 results for less than 35% of their locations.

Considering the number of people choosing where to eat based on in-the-moment smartphone searches, a lack of accuracy and poor search ranking affect restaurants from being found in local searches. MOOYAH wanted to improve its discoverability in local search to help improve foot-traffic and to better compete with nearby fast casual restaurants in the area. Success was found when MomentFeed partnered with the company to help optimize local social and search listings and also provided a platform that allowed MOOYAH to provide locally relevant content to local Facebook and Google+ pages.

Making it Simple to Find MOOYAH and Boosting Visibility

MOOYAH understood that there was a need to improve its local listings accuracy to help fans searching for the brand and potential customers searching non branded keywords, find their locations. MomentFeed's initial audit of MOOYAH's locations had on average a .23 mile discrepancy on Google, between actual and listed location, as well as 28 duplicate Google listings. MomentFeed made sure the right address and phone number appeared for each and every location while branding all Google+ location pages with profile and cover photos. Additionally, we merged 118 Facebook duplicate pages and claimed the 2,000 check-ins and 2,100-plus likes on these pages in the merging process.

By cleansing the information on MOOYAH's local pages and optimizing for the frequently searched non-branded keyword "burgers", local digital discoverability skyrocketed. Initially 7 of 62 restaurants ranked No. 1 for the keyword, by March 2016 that number increased to 25 of 73 ranking No. 1. In other words, MOOYAH realized a 238 percent increase in their restaurants ranking at the No. 1 spot - a huge local SEO victory.

Similarly exciting is the 152 percent increase in positioning among Google's 3 Pack, an important metric because these 3 Pack listings receive the vast majority of traffic. Today 80 percent of all MOOYAH locations show up in Google's 3 Pack for the term. That's coveted positioning that drives mobile-first consumers to restaurants and enables competition with larger and more prevalent competitors.

MomentFeed accomplished this quickly and efficiently through the use of our direct API integrations and partnerships with Facebook, Bing, Foursquare and Google. Localized content was also syndicated to MOOYAH's customer-facing local social pages, a process that maintains and expands keyword and engagement advantages. Lastly, MomentFeed published listing information to smaller Internet aggregators, a process that further improves search results. In the future, MomentFeed will prove even more effective in such efforts, thanks to a recent agreement as an Enterprise Yelp Partner.

MomentFeed offers the tools multi-location businesses require to optimize their social media, SEO and local digital needs. With the improvements MOOYAH realized, it can effectively compete with much larger competitors in a wide range of markets, even though it's a newer, still-growing business. By maximizing benefits, taking all important elements of the local digital atmosphere into consideration and working closely and directly with MomentFeed, MOOYAH moved to a new level of visibility and competitiveness - and continues to improve.

Learn how MomentFeed can help you compete by boosting local visibility.

Speak with an Expert

Local Marketing Masterminds: A Virtual Chat with Pinch A Penny

For Texas Roadhouse, Local-First Marketing Isn't Just About COVID-19 – It's a Long Game